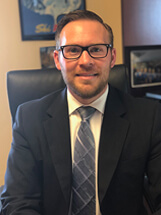 Kyle’s practice is focused on criminal defense and civil litigation. He regularly represents clients charged with serious crimes including DUI/OWI; illegal drug manufacturing, possession, delivery, and trafficking; burglary, theft, and arson; aggravated battery; and assault. Kyle also provides representation to those who have been convicted of a criminal offense and sentenced, but who wish to challenge their conviction and sentence on appeal or by post-conviction proceedings. Kyle represents both plaintiffs and defendants in civil lawsuits including personal injury, contract disputes, defamation, orders of protection, divorce, and custody.

Kyle has represented clients in dozens of jury trials, bench trials, and motion hearings. He recognizes the incredible amount of stress created by being charged with a crime or otherwise being a party to a lawsuit, and he strives to provide both superior representation and counsel to all of his clients.

Kyle met his wife, Ashley, during law school, and they have 3 children together. Kyle loves to travel and has visited 13 countries and 30 states, some more than once. He is an avid alpine skier, occasional motorcyclist, and Ford Mustang enthusiast.