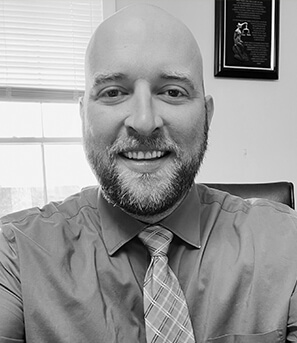 Blaise is a partner at the firm who came on board with the team near the end of 2014. Blaise focuses on criminal and family law. Blaise has experience in drug possession, drug trafficking, sex crimes, homicide, and other felonies. He also works in traffic court, representing clients in a wide spectrum from DUI/OWI cases down to speeding tickets. The other half of his caseload is in the area of family/domestic law. Blaise works extensively in divorces, parenting time, parental responsibilities, child support, guardianships, orders of protection and adoptions. He prides himself on creating respectful, relatable relationships between himself and his clients. Blaise believes in practical approaches to his cases, while maintaining a high level of competency and diligence. Licensed in Illinois, Iowa, and the United States District Court for the Central District of Illinois, Blaise has been before the Court in 15 counties in Illinois and 5 in Iowa. Blaise grew up in Central Illinois, in a small farming community of around 300 people. He graduated from Monmouth College with a Bachelors Degree in History while playing varsity basketball for the college. Then he obtained his Masters of History at Western Illinois University before obtaining his juris doctorate at Southern Illinois University in Carbondale. While attending SIU, Blaise was a member of the Law Journal and interned at the Missouri State Public Defender’s Office in Jackson, Missouri. Blaise is a member of the American Bar Association, Illinois State Bar Association, Warren County Bar Association, Henderson County Bar Association, and the Iowa State Bar Association.